skip to main | skip to sidebar

Case Study in Charismatic Authority: Fidel and the Dove

The armed conflict between the 26th of July Movement and the Government of Cuba came to an end in the early morning hours of New Years' Day 1959. Facing limited prospects for success, then-president Fulgencio Batista fled Cuba for the Dominican Republic at 3 AM. The Commanders of the Revolution, as the leaders of the armed movement came to be known, quickly secured control over the provinces in the aftermath of Batista's departure. On January 8, 1959, Fidel Castro Ruz entered the city of Havana. On that very day, he delivered a lengthy victory speech in which he recounted the years that had preceded that occasion and outlined a course of action for the coming year.

At a pivotal moment in the speech, a dove landed on his shoulder and two others hovered around the stage. Over the past 50 years, this landing has been the subject of much speculation, controversy, and worship. Some have claimed that Luis Conte Agüero, at the time a Fidel ally and mentor, had spent the previous week training the dove for this performance. Others have suggested that lead pellets had been placed in the dove's beak prior to its release, weighing it down and forcing it to grasp for the first available... shoulder. Additional explanations have ranged from the random to the pheromonal. 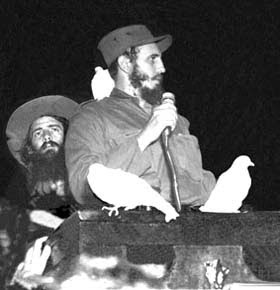 Whatever the reasons for the dove landing, the dove landed. And hundreds of thousands of people watched as it landed on the shoulder of the man who would go on to become the longest serving head of state in the history of the Western Hemisphere. Millions more saw pictures of the seemingly unbelievable occurrence in the nation's newspapers and television channels.

As Fidel assured Cuban mothers that he "would do everything in his power to solve all of the nation's problems without a single drop of blood being shed," the dove (and the community of doves that stood beside it) entrusted the 32-year-old revolutionary with the power to lead them into a differentiated state of affairs. In one totalizing moment, the natural seemed to yield to the discursive, the impossible seemed possible, and the mythic peacefully gave credence to the political. It is this last point, whereby new power structures arose from what, at first glance, may have looked like thin air, that holds particular salience for the course.

How did Castro parlay his victory (or Batista's defeat) into authority with a monopoly on violence? In other words, how did Castro's authority achieve legitimacy? One possible explanation for this process of legitimation rests on the notion of charismatic authority, one of three ideal types (Idealtyp) that German sociologist Max Weber used to classify forms of political domination, best explained in his aptly-titled book, The Three Types of Legitimate Rule.

Richard R. Fagen notes that Weber defines charisma as "a certain quality of an individual personality by virtue of which he is set apart from ordinary men and treated as endowed with superhuman, supernatural, or at least specifically exceptional powers or qualities." Some who witnessed the dove-on-the-shoulder moment perceived it as nothing short of a miracle, an anointment from the heavens, a moment of spiritual transcendence. This moment, then, corresponds directly with the formation (or at least, the concretization) of Fidel's authority-cum-charisma. Whether a symbol of divine kingmaking or a happenstance call to peace, the dove created (or contributed to) a visual narrative of Fidel's legitimacy. Please refer to Fagen's article, "Charismatic Authority and the Leadership of Fidel Castro," originally published in the June 1965 Western Political Quarterly, for an overview of the relationship between charisma and authority vis-à-vis 1959-1965 Fidel Castro. (The article is one of the readings for Week 8.) Alternatively, turn to Alejo Carpentier's El Reino de Este Mundo for a literary take on charismatic authority in the context of the Haitian Revolution. 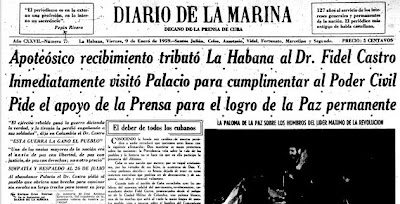 An editorial on the front page of the January 9, 1959 edition of Diario de la Marina, one of Cuba's leading center-right newspapers at the time, declared:

The editorial affirms that it saw "a clear sign of Providence" in the white dove, "the universal sign of peace that fully translates and interprets the grand wish, the entire will, of the Cuban people." (The newspaper would go on to cease publication in May 1960 in response to government pressure and organized acts of violence and vandalism.)

The first minute of the following clip from Estela Bravo's 2001 documentary, Fidel: The Untold Story, shows video evidence of the landing and delves into its perceived religious significance:

The dove landing continues to hold currency in Cuban politics. A January 2008 Reuters article, in which a Cuban babalao (high priest in the Santería religion) asserts that Fidel is "untouchable," includes the following:

Santería followers have believed their gods were on Fidel Castro's side ever since a white dove landed on his shoulder during a victory speech in Havana after his 1959 revolution.

The following video shows a March 2009 performance-art piece assembled by Cuban artist Tania Bruguera, in which members of the audience were given the opportunity to speak for one minute in front of a microphone as two actors placed a dove atop their shoulder, evoking (arguably, parodying and subverting) Fidel's 1959 speech:

The story of Fidel's dove and its many photographic iterations serve as a reminder of the continued interplay between charisma and the reified power relations of the Cuban Revolution.
Posted by Fernandez at 10:45 PM 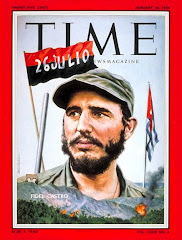